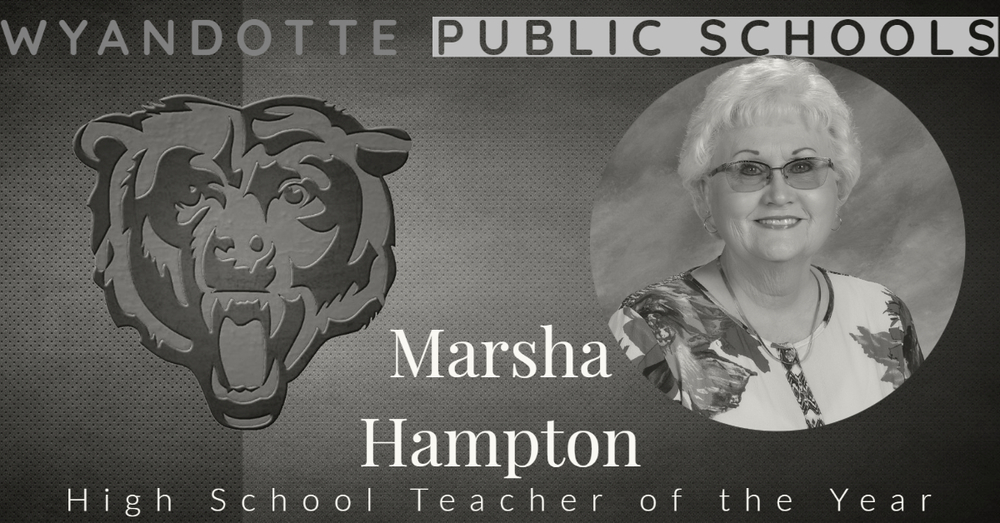 We had more than a little trouble narrowing down the Wyandotte High School Teacher of the Year voting process down to one person.  We have now decided to honor both of them as two of the most deserving teachers to earn the award in the history of Wyandotte Public Schools.  When students who have graduated from this place over the last eight to ten  years think of Wyandotte High School, these two names are at the top of the list when it comes to people who made an impact on their life.  They have long been favorites among the student body and it is long overdue that we recognize them for the impact they continue to have.  It is our honor to introduce one of the High School Teachers of the year: Mrs. Marsha Hampton.

Mrs. Hampton has been the junior and senior level English instructor at Wyandotte High School since 2015 and has also taught the concurrent Composition I and II classes through NEO A&M college here on site since that time.  She had a full career at Seneca Public Schools doing similar work before coming to Wyandotte. She would be the first to tell you that she came expecting to be here for a few years to finish out her career, but instead found a home and a place that is close to her heart.  One only needs to attend a high school graduation to see the kind of effect she has had on those students before they walk across the stage.  She has been mentioned in a valedictorian speech or salutatorian speech every year since she began working here.

The high school principal, Matt Robertson, said “Mrs. Hampton is everyone’s favorite.  She’s fun, inspiring, relatable, and human.  She’s both the ultimate professional and the relatable adult figure that students don’t mind dropping the water line with.  If there’s a need, she’s the first to open her wallet and pay for it.  If there’s a hurt, she’s the first shoulder to cry on.  She is a very cerebral professor of Literature that teaches high level thinking skills, analysis, and writing skills that benefit our students far beyond these halls.  Every year, former graduates want to come back and visit us and talk with us about where they’re at and what they’re doing.  Their first stop is Mrs. Hampton’s room. Watch our junior and senior students after a ball game that they have played.  She’s the first one they’ll go to after a game to get a picture with.  That tells you a couple of things about her: number one, she’s there at almost all of those games, and number two, it matters to our student-athletes that she’s there.  She leads our staff in ways the public would never know and we are better here in every way because she’s a part of who we are.”

When those who nominated Marsha were asked why, they said things like, “Because she cares for kids and is passionate about what she does,” and “First, she has the love of teaching, which is most important, but also  holds her students to high standards which I believe will help them in college, vocational, or other fields they choose to pursue.”

They believe her greatest contributions have been things like:

“Mrs. Hampton prepares kids for the next level and also for life. She just doesn’t teach she shows the importance of being responsible, caring, and motivated to be the best you can be.”  They also said, “She has respect, both from students and staff alike.  She strives to hold students accountable and guide them to meet their potential.  She knows each student's potential and has a relationship with her students.  She doesn't give up on students and works with different ability levels giving them a feeling of success.”

Their opinions and feelings on Mrs. Hampton’s teaching include, “Mrs. Hampton was a great mentor to me and I want to have that same passion for teaching as she does. She’s infectious and kids just LOVE HER!! She’s made me a better teacher!!” Others said, “She has a heart of gold!  Many don't know she helps students who are struggling financially and just by listening . . .she has a camaraderie with both students and staff and is honest with whomever she is working with,” and  “She has my respect and admiration with her many years of service, her intelligence, and determination to be an effective teacher.”

These same colleagues believe the strengths she displays as a teacher are things like:

“She prepares kids for life/college,” “She is a great example to others,” “She always has very thoughtful opinions during our PD times,” “She cares for everyone,” “Kids love her and she loves them,” “Kids respect her and do not want to let her down,” among other things.  One nominator said, “She is a strong, moral influence in the lives of students and staff alike.  I admire her diligence to find different ways to present information so that each student has the opportunity to learn and can be successful if they try.  I have witnessed her relationships with students many many times, she uses a lot of humor instead of condemnation with her students.  She is an inspiration.”

We are overjoyed to brag on Mrs. Marsha Hampton as a Wyandotte High School Teacher of the Year for the 2021/2022 school year!!